At the Forefront of Philanthropy and Innovation in Social Investment

“My forebears also instilled in me the deep conviction that wealth demands certain responsibilities. This conviction has led me to seek and implement new ways of doing philanthropic work.” “Stephan Schmidheiny, My Vision, My Path”, January 2006

Stephan Schmidheiny has been involved the philanthropic community since the beginning of his professional career in the 1980s. He inspired and created a series of non-profit organizations to encourage the development of entrepreneurs, as well as financial, social and environmentally sustainable businesses, with global reach and regional impact in Latin America. He also promoted the arts and made important contributions to education and professional training.

Several of the foundations created by Schmidheiny are established in Latin America, as a result of his interest in the region and its people. There are notable cases, such as FUNDES, Fundación AVINA, MarViva and VIVA Idea, that continued to evolve until they attained international standing. FUNDES promotes and strengthens the management of SME (small and medium-sized enterprises); Fundación Avina contributes with concrete and relevant changes for a more sustainable development in Latin America and beyond; MarViva’s objective is to protect the vast marine resources of the Tropical Eastern Pacific; and VIVA Idea articulates learning communities around sustainable development 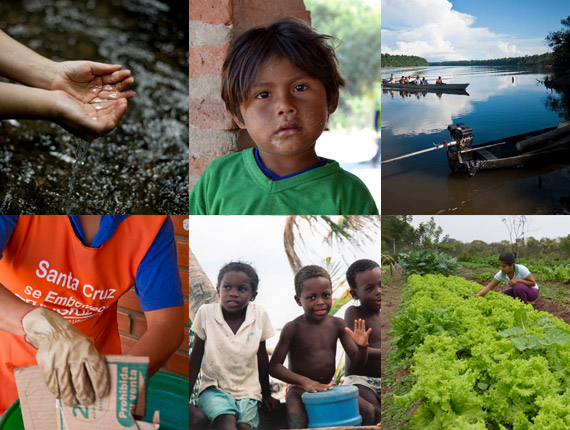 In order to provide long-term funding for these institutions, Stephan Schmidheiny created VIVA Trust in 2003. The word VIVA is a simplified version of the expression Vision and Values, and is how the trust is known. He bequeathed the shares of the companies that form Grupo Nueva to VIVA Trust. Part of the profits and dividends that these companies generate are invested in the Latin American foundations in order to ensure their permanence and transcendence.

As part of his involvement in the arts, he created the Alexander Schmidheiny Foundation, which supports cultural, social and ecological projects and activities, and increases and promotes the Daros modern art collection in Europe and Latin America.

“It was obvious that traditional philanthropy was not the option I was looking for. I needed to find a catalyst that would trigger the type of sustainable human development that all governments of the world had agreed upon at the Earth Summit.” “Stephan Schmidheiny, My Vision, My Path”, January 2006.

In 1986, Stephan Schmidheiny was elected president of the International Management Institute (IMI) in Geneva, for his vast knowledge of the business world. During his term he identified other entities that also specialized in establishing executive committees and encouraged the merger with the Institute for the Study of Business Management Methods in Lausanne. The goal was to create a more robust organization that resulted in the International Institute for Management Development (IMD), with headquarters in Lausanne, Switzerland, a world leader, like others, in the field of business management education.

Together with Canadian businessman Frank Tilley, Schmidheiny inspired the establishment of the Family Firm Institute (FFI) for research and training in the field of family business. With the emergence of the IMD, the FFI became the IMD Global Family Business Center, which to this day continues to offer the “Managing the Family Business” program.

This research center, or “think tank,” supports change towards a more sustainable society, both financially and socially, for the governments of the region, as well as the private sector and public companies.

Watch the video about INCAE’s history.

In 2002, Stephan Schmidheiny and Erica Knie created the MarViva foundation in Costa Rica and Panama, and four years later added Colombia. The foundation adopted the mission to protect the vast marine resources of the Eastern Tropical Pacific. It proposed and implemented a model for the management and responsible use of marine resources, based on supporting monitoring and surveillance efforts, establishing laws, and improving legal proceedings. These activities are carried out by multidisciplinary teams comprised of marine biologists, journalists, political scientists, oceanographers, geographers, among others.

From the beginning, MarViva has operated as a non-profit NGO, aimed at the conservation and sustainable use of marine and coastal resources, paying special attention to protected marine areas.

The Alexander Schmidheiny Foundation was created by Stephan Schmidheiny as a philanthropic entity in 1993, in honor of his younger brother Alexander, who passed away the previous year.

The Foundation started its philanthropic endeavors in the Schmidheinys’ neighborhood, in eastern Switzerland. It then extended its activities all the way to the Rhine Valley where it has been supporting cultural, social and environmental projects.

With its Daros Art Education program, aimed at a young audience, it explores and achieves new alternatives to bringing art to the public.

The Daros Collection dates back to the 1980s, when Alexander Schmidheiny and Thomas Ammann came together through their shared passion for art.

As a result of their excellent connections in the art world, Alexander and Thomas were able to acquire pieces from notable artists of the mid-20th century, such as Andy Warhol, Brice Marden, Cy Twombly, among others.

After the premature death of the two entrepreneurs, Stephan Schmidheiny wanted to continue the cultural initiative his brother had been part of. Therefore, he sponsored the Daros Collection, ensuring the evolution of the project and making it accessible to the public through open exhibits. At that time and after a specialized evaluation, some pieces were sold and acquisitions were made, adding new artists such as Gerhard Richter, Willem de Kooning, Agnes Martin and Mark Rothko.

Between 2001 and 2008 some of the pieces of the Daros Collection were presented at the Daros Exhibit at the Löwenbräu-Areal in Switzerland. As of 2010, the collection can be permanently seen at the Bayeler Foundation in Riehen, Switzerland.

Founded in 2000 by Stephan Schmidheiny and Ruth, his wife at the time, Daros Latin America is an art institute with headquarters in Zurich. Its objective is to create and preserve a collection of Latin American contemporary art.

Along with the permanent exhibit in Rio de Janeiro, the Daros Latin America collection is exhibited at museums and institutions all over the world, in the framework of several partnership projects.